I don't know if annnnyone is out there, after I neglected my blog for **cough, cough** 4 YEARS. But I'm writing anyway,  to record activities, memories, outings. 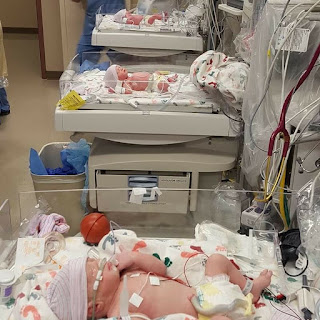 Moved back from Texas , to Arkansas. Found great location, right on a creek. Had triplets. YES, triplets. 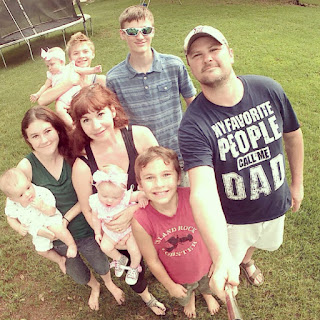 Then Belle graduated high school. Boys are still busy with Tae Kwon Do,  mowing jobs, church activities. Babies are 8 months old now, and so much fun! Today we played with balls in old muffin tins. 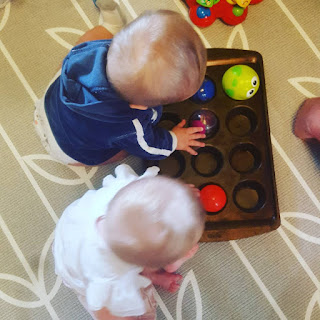 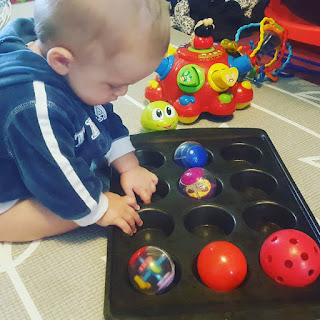 I'm trying to get creative with their play, so none of us get bored. A broad range of activities is great for everyone.
Posted by Wendy at Friday, September 28, 2018 1 comment: Links to this post

Well, it looks like we have some official plans now. We'll be moving back to Arkansas this summer. I've known, tentatively, for about a month now. I was waiting to tell people until I could come to terms with it. ;)
Don't get me wrong, I love my friends and family. I love the beauty of the Ozarks....the hills, rivers, caves. I adore all that! I grew up hiking in those woods, canoeing those waters.

However, it was my dream to move farther south. I know eternal summer isn't for everyone, but I'm pretty dang happy with it. And I love the beach. Love. Plus, we had started to make great friends in our last city, and joined a wonderful homeschool group. I was hoping our plan would be to move back to that city, as soon as we were able. 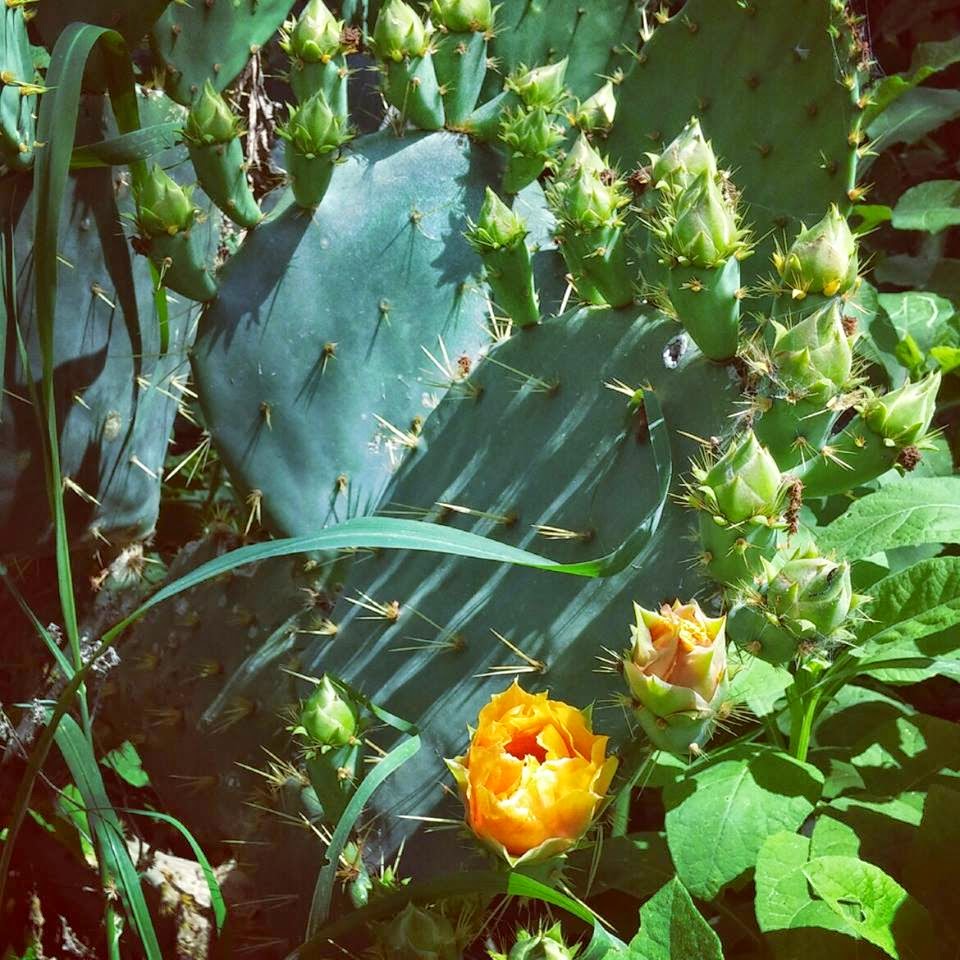 The things is, Fred is just not happy here. It doesn't feel like home to him. Growing up, I had traveled quite a bit and moved across the country....but Fred spent his entire life in Northwest Arkansas, and being uprooted has been very hard for him. Couple that with the cultural differences I mentioned before, and Fred is ready to haul it all back "home." I get that. Really I do. I've been lonely, too.

He tried this for me, and I can't express my appreciation. When we leave Texas, in June, I'll have had almost a year to live my dream near the coast. An extended summer-y vacation. And, if nothing else, it has brought us closer together. We came here knowing NO ONE. We did everything together, tried new things, explored, made friends, got involved.

We also missed an unusually cold and long Arkansas winter. Perhaps that's why God set this whole thing in motion. ;)


Still. Guys, I was HERE on Monday. On the pier, overlooking the bay at South Padre Island.
Just a regular Girls Night out.
I'm going to miss that, fiercely. 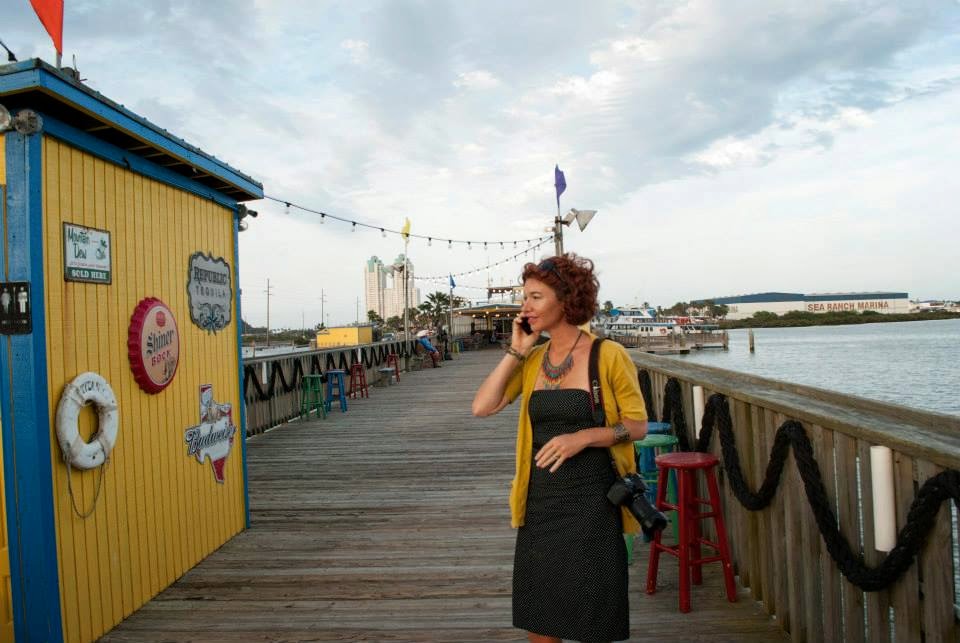 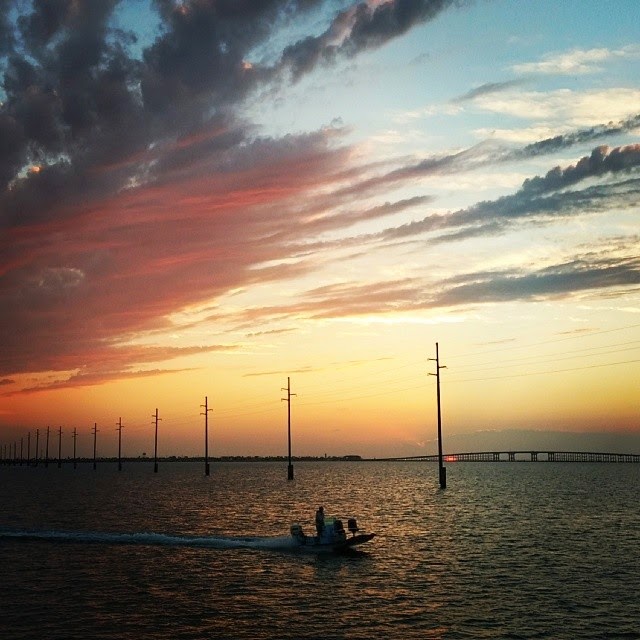 Sunsets over the ocean are something I don't take for granted.
Amazing.

Okay, yada yada. It's going to be hard for me.
But Fred brought me here, because my heart desired it. His heart desires to go back, and I will follow him. We'll return to our gorgeous hills and cliffs, caverns and caves, rivers....things that are hard, if not impossible, to find around here. We'll return to our friends and family, who I have also missed, fiercely. The beauty is that we can really be happy either place! We'll continue to travel and explore, wherever we're planted! So, while part of me feels sad about leaving, I am truly also excited about returning to our wonderful area in the beauty of Arkansas!
Posted by Wendy at Wednesday, April 09, 2014 1 comment: Links to this post

The Long Version, living dreams even with shadows

I haven't spent much time around the computer lately, but last night I felt the urge to look up some old pictures. Then I spent a solid hour reminiscing through their toddler pictures and reading all the "funny things they say" tag through this blog. Makes my heart so happy!! And inspires me to blog more, if only for my own benefit. This is a journal that I'll never misplace!
This is Oli's birthday week! My baby will be 7 on Friday! Today we are headed to the beach for Day 1. We've waited a month to head back to the sea, allowing time for the Winter Texans & spring breakers to enjoy it and then take off! It's a good 10 degrees cooler by the beach, so we're looking at mid-70s there today. Great for sand play and hiking by the shore, but still too cool to get in the water.
Oliver is still as funny as he always was. The other day, I served fish sandwiches on sesame seed buns. A minute later, I hear him holler, "Mom! I have sandwich seeds!! Can we plant them?"

Hi!! ((echo))
We're still here, living in deep south Texas. And I've become invisible, sorry. ;) When we moved in December, it took me quite awhile to actually get cable/internet set up in our new home, so I all but abandoned facebook and other online networking.
Not a lot has changed. We're enjoying our beautiful southern winter & early spring. It was about 90 degrees here yesterday, which I consider nearly perfect.
Sunshine, soccer, bicycle rides. The perfect Saturday.
We've avoided the beach like the plague this month, with all the spring breakers in the area. But soon the Winter Texans and spring breakers will be moving along, and we'll have beautiful beaches to ourselves from April- June.
We've had a chance to see more of the world. Passports, check. We added Mexico to the list of places we've been. Far far different from our trip to Canada!!
I do miss my hills and canyons, caves, and cliffs. There's such beauty all over this world. In this chapter, we're enjoying the beaches and birding centers.
Honestly, though, this move has been a particular struggle for my husband. The culture is very different. The climate isn't as agreeable to him as it is to me. The general area isn't as clean and friendly as what we're used to. This isn't home. And we don't plan to stay in this city much longer.
We have big changes coming up this summer. Life is such a balance, of going where you're called, making the best choices for your family, year by year.  We've moved more in the last year than in the previous 16 years combined. It's been a challenge but also an adventure. It's been a time of enormous growth for relationship.
Prayers please, as we continue to settle wherever we're meant to be, and as I work on following my husband's lead. I'm not naturally good at following, and definitely need supernatural strength for it!

Up in the air

Oh, y'all. I'm having a stressful moment. We're so up in the air right now. Boxes are packed all around me, making a little read-to-move igloo. And I just don't know what's going to happen. Wasn't I just in this waiting game a few months ago? Shouldn't I have learned to relax. Trust. Not stress out. Man, that's so hard.
Our rental place now has served it's purpose, and we're moving on by the end of the month. We just don't know WHERE for sure!
Our landlords here have been amazing. For crying out loud, she just brought over chocolate cupcakes, for Fred's birthday tomorrow! {{heart}} They are so.very.sweet.
But we've been dealing with a lot of problems with our place. And, despite their best attempts to remedy the situation, it's going to require some intensive work, due to water and mold damage. They have released us from our lease, and we're all packed up.
Now. The where.
Fred is working 40 minutes from here, and it would make a world of difference for him, if we can shorten that commute. We're working on getting a house that's only about 5 minutes from his route, but we won't find out until sometimes this next week if it's ours. The wait!!! Ahhh!
Did I mention that his birthday is tomorrow, and Christmas is 10 days away? And my home is in boxes. {deep breath} It's the uncertainty that pains me.
And, also, I miss my color! I was just over at Sara's Art House, oohing and aahing over the color and happiness. Oh-- I miss my packed-up color happiness, my craft supplies, my pom poms for little hands to play with, my bright dishes!
Pray for us? For a home soon. For answers and security. We love it here in the Rio Grande Valley. The people have been amazing to us. The weather is fantastic. We just need our place. :) Thank you!

Posted by Wendy at Saturday, December 14, 2013 2 comments: Links to this post

The kids and I are excited about Christmas on the coast, y'all!!
It's our new theme. 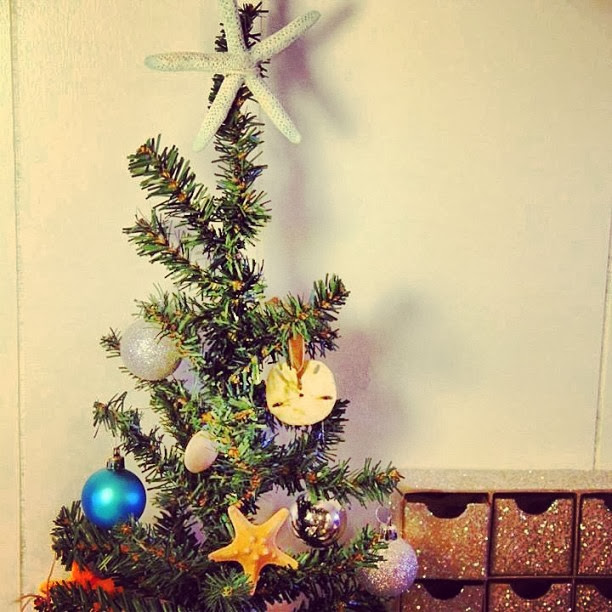 When we moved, we sold or gave away about half of what we owned. We simply didn't have room to bring it all. That included our Christmas tree and much of our décor. (Yes, that was hard.) I think there's still a box of stuff in my grandfather's garage, too....including our stockings. Need to get those!
Thankfully, we found adorable mini trees at the 99 cent store! And a large white tree at Goodwill for a whooping 10 bucks. We bought two packages of ornaments, also from the 99 cent store, and gathered the rest along the coast. Proof that you can decorate on a budget! ;) 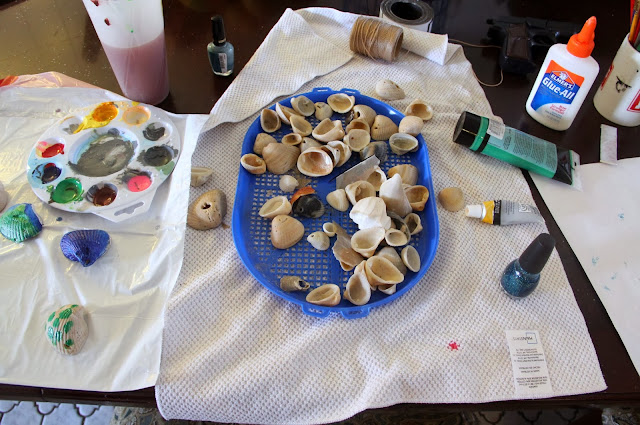 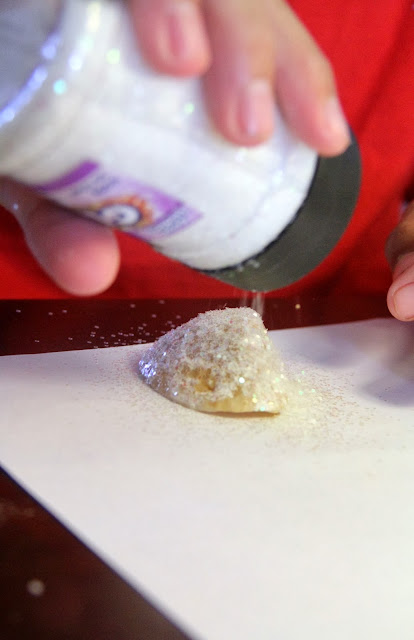 Wanting to stick to our coastal theme, but not spend a fortune ordering a bazillion cards, we decided to make them. Time to get creative!
This is what we came up with:
Seas and Greetings! 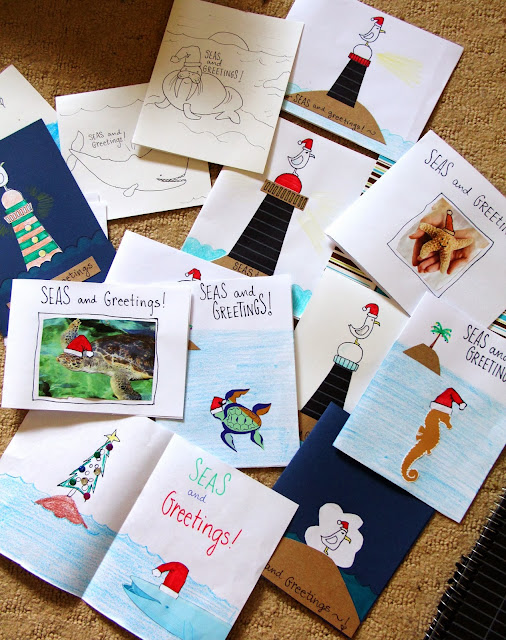 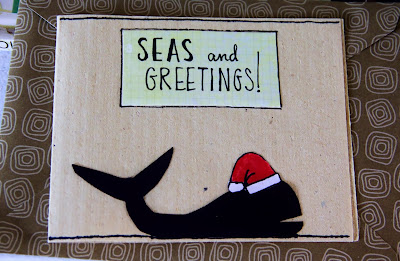 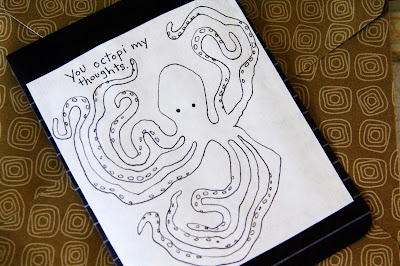 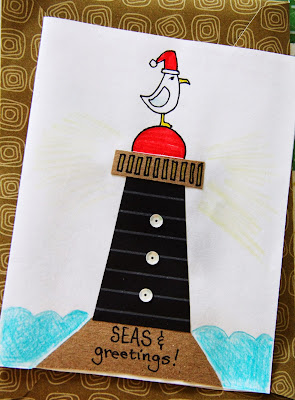 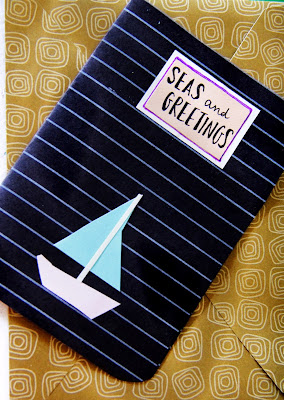 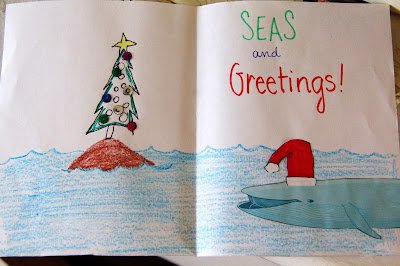 There you have it. Family-made and coastal themed!
The best part is that everyone could contribute.
(plus, glitter- and sequin-use, which is a given.)

Wendy
AR, United States
I am in love with God, my family, and all things art! Homeschool mama to The Artist(7th grade,) Nature Boy (5th grade,) Dash (2nd) and LittleLad (K)

Promote Your Page Too